Cinderella III is the best one. I remember when I was little, my family had the first and third Cinderella movies on Blu-ray, and I distinctly remember watching the third movie several more times than the first. (Note: I had no idea a second movie existed until about four years ago. I literally thought they skipped the number two.)

Now, when it comes to the classic Disney princess movies, the need for a sequel is always nonexistent. I mean, there were two sequels to The Little Mermaid, and I bet only a handful of people could tell me what they were called and what they were about.

I’m gonna give you a little overview of the movie’s amazing plot. We open up and it’s a year after the first movie ended. Cinderella and Prince Charming are living their happy lives, and go to the woods to celebrate their one year anniversary. The fairy godmother is there to make sure the event is magical. Lady Tremaine, Drizella, and Anastasia are living in a little hut in the woods, and Anastasia goes off exploring when she sees the wand. The fairy godmother has accidentally cast it aside, and Anastasia takes this opportunity to take it back home. She presents it to her mother, saying that it could give them the opportunity to make their lives better.

Lady Tremaine, once convinced of its power, goes back in time to the moment when Drizella and Anastasia were trying on the glass slipper. She uses her magic to make Anastasia’s foot fit the slipper, and, in a flash, it’s her on her way to the palace to become the princess. 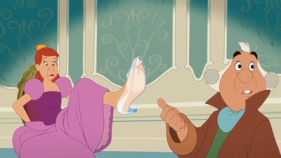 Cinderella, distraught, makes her way to the palace to try and convince the prince that she’s the one he danced with at the ball, but he’s been spelled to think he’s in love with Anastasia. First, he thinks she fits the slipper (which she wears on one foot for, like, most of the movie. That part was a bit strange.), but then, on top of all that, Lady Tremaine casts a spell that manipulates his memories, replacing Cinderella with Anastasia.

So, this movie is about Cinderella trying to figure out a way to get the prince to remember her, which includes trying to steal the magic wand from her former “family” while disguising herself as a maid, being sent away on a boat, and an epic scene where the prince jumps out a window. Yes, that’s right, the prince just up and hurls himself out a castle window. It’s pretty great.

This is a pretty short movie, maybe a little over an hour long, so it definitely won’t waste your time. I mean, you could just watch a compilation of the best moments from the movie and get some great times in there, but the full effect won’t be achieved unless you watch the movie. Early today, I actually decided to rewatch the movie for the billionth time, and I rediscovered how much I loved it. I watched on YouTube all of those videos like “Why High School Musical 2 is the Best One” (which it is) and I thought: “Wow, that really relates to what I want people to think about Cinderella III!”

So here I am, convincing you, begging you, to watch Cinderella III.

It’s actually really great if you couldn’t tell by the buckets of praise I’ve showered on the movie for the past…I don’t know, eight paragraphs plus a sentence of me begging? Not only do we actually get personalities injected into the prince, but we get to see a little into what motivates Anastasia. In the first movie (at least, I think) Anastasia was the “less harsh” stepsister. She was mean, but Drizella seemed to be the mastermind behind a lot. Or maybe I just completely made that up, I don’t know.

But, nonetheless, we get to see deeper inside some of these character’s minds, and that makes for a really interesting movie. It’s like “Oh, we got our happily ever after but oh crap it’s gone now but yay we got it back but in a different, cooler way.”

2 thoughts on “why cinderella iii is the best one”